Unveiling disturbance patterns in temperate forests around the globe.

In a recent study, published in Nature Communications, we found that global disturbance patterns in the temperate biome are highly variable, and shaped by variation in disturbance agents and traits of prevailing tree species.

This paper was a huge collaborative effort under the lead of Andreas Sommerfeld, Cornelius Senf and Rupert Seidl in cooperation with 23 other disturbance ecologists from around the globe. 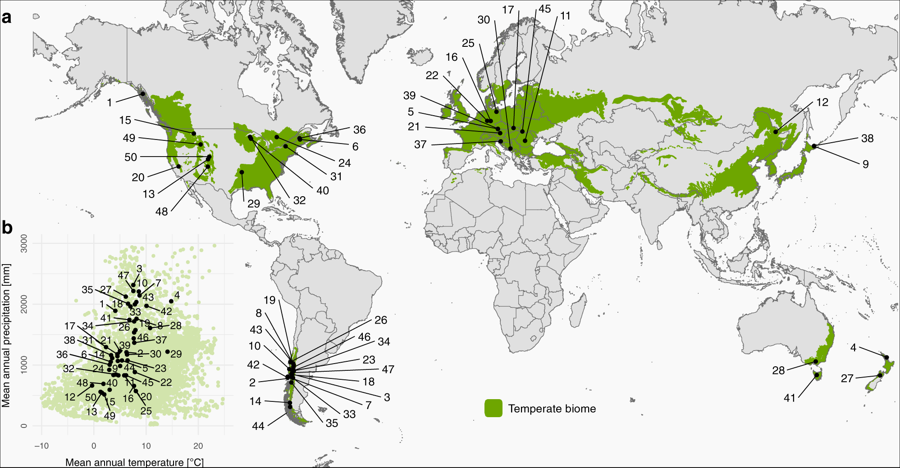 We quantified the considerable variability of disturbance patterns using remote sensing data on recent (2001–2014) disturbances with in-depth local information for 50 protected landscapes and their surroundings across the temperate biome. We analyzed whether recent disturbance episodes around the globe were consistently driven by climate, and if human influence modulates patterns of forest disturbance.

Areas with high disturbance activity were consistently linked to warmer and drier than average conditions across the globe. We also found signs of human influence observing smaller and more complex disturbance patterns in protected areas compared to their surroundings also affected by human land use. This signal disappears in areas with high recent natural disturbance activity, underlining the potential of climate-mediated disturbance to transform forest landscapes.

Furthermore it was subject and inspiration to a scientific poem:

« A new approach for scaling vegetation dynamics - The effects of forest cover and disturbance on torrential hazards: large-scale evidence from the Eastern Alps »